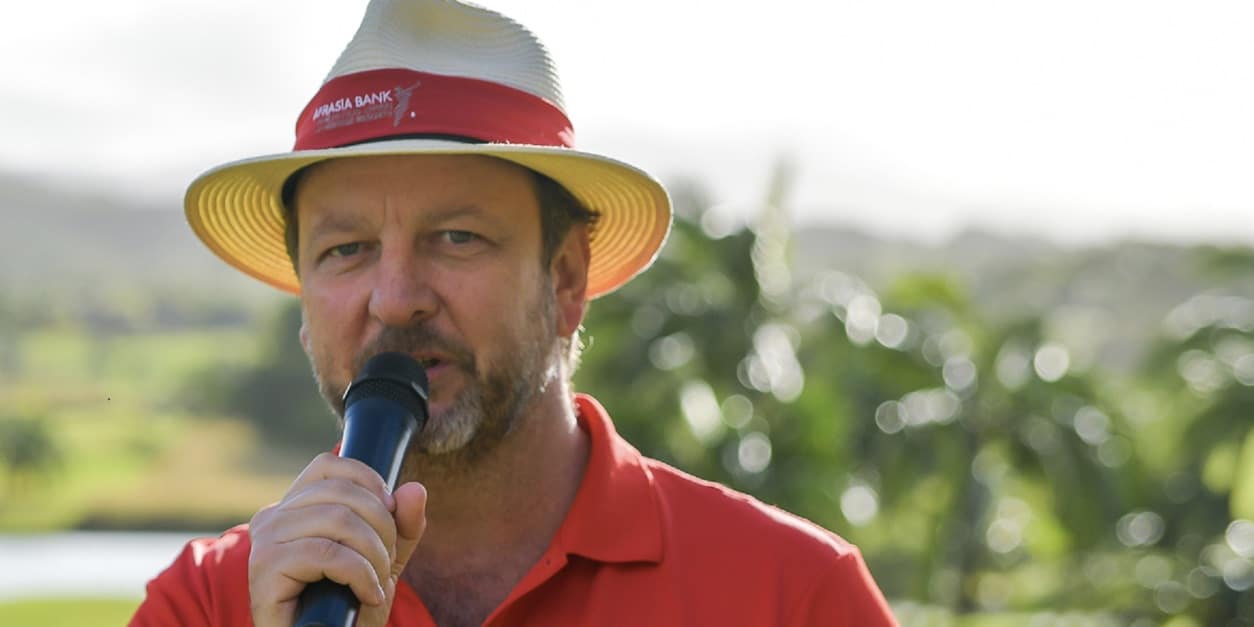 2019 will represent the fifth consecutive AfrAsia Bank Mauritian Open (ABMO) as an event, drawing a growing number of professional golfers from the 3 Tours – Europe, Sunshine, Asia. It is clearly an auspicious anniversary, worthy of celebration.

MGT: Many of the participating pro golfers have specifically expressed their gratitude to AfrAsia Bank for its leading sponsorship role for the Mauritius Open… Why did the Bank choose this flagship event, and golf as a sport, to tie its brand to?

Thierry Vallet: Golf is the ideal sport to mix performance, socialising and skilled networking, AfrAsia chose this sport since our inception as we believe that golfers share similar characteristics to us as a private bank: strength, flexibility, and being bold and different. Our aim is to have AfrAsia as the reference Corporate and Private bank in the region; with the goal of becoming the No.1 choice of bank within the HNWI community and raising the profile of Mauritius as an international hub. Therefore, the ABMO was the perfect opportunity to raise awareness of our brand even further. Furthermore, we were incredibly fortunate to have federated top Mauritian stakeholders, both private and public, who joined us to make this event possible, and to create the biggest sporting event in the region. Finally, what an opportunity for Mauritius to be broadcast for more than 20 hours live to some 400 million households around the world…

MGT: Being the main sponsor of the world’s first ever tri-sanctioned golf tournament seems to tie in perfectly with the AfrAsia’s description of itself as ‘the bank that builds bridges between Africa, Asia and the World’… a happy coincidence?

T.V.: We have conjured our entrepreneurial DNA to bring forward an integrated offering for our Clients. Whilst we do this through each stage of business, we also look to ‘connect’ with them globally, building bridges throughout the world, and of course the Africa-Asia corridor is our reference point and where we start! So, to have been the pioneer, the Principal Sponsor and Co-Organiser of the first ever tri-sanctioned Golf Tournament was an amazing opportunity that we could not miss… Doubtless, it was a bold decision at that time to take up such a challenge, but what a great event we created for Mauritius, the Golfing Industry; the Hospitality Industry and the Financial Sector… with an amazing visibility in Africa, Asia, and the rest of the world. We have clients in about 150 different countries, and we received messages from all over the world, with people telling us saying that they saw the tournament on TV, how magnificent the images were… We hope that this has contributed not only to bring more business in Mauritius for AfrAsia, but for all the stakeholders and Mauritius in general.

MGT: Evidently the strategic objectives of AfrAsia Bank within the region are being met as part of its corporate development, but does sponsoring ABMO provide direct benefits accruing to AfrAsia from its role with this tournament?

T.V.: It is always difficult to measure the direct benefits of sport sponsorship, but the AfrAsia brand has definitely seen great benefits locally, regionally, and even beyond. Obviously, the TV and online exposure during the golfing week promoted AfrAsia Bank which resulted in increased traffic to our website and other touch points. Promotion of AfrAsia products heightened and the event supported our value proposition – going far beyond products and services, building on and showcasing the importance of meaningful and long-term relationships. The growth of AfrAsia Bank over the last 12 years has been consistent, from a greenfield project to a success story for Mauritius, as a pioneer in the Private Banking sector at that time. It has also helped to position Mauritius as a preferred Private Banking Jurisdiction for Africa and Asia today. MGT: The principal shareholder of AfrAsia Bank is also the largest conglomerate in Mauritius, involved in property development, hotels, and tourism related projects… is this a good example a ‘virtuous’ circle of strategy, investment, development, or are all these entities working quite independently of each other? T.V.: AfrAsia is owned by various shareholders, Mauritians and foreigners alike, and we are proud to operate completely independently from them. However, having the largest conglomerate on the Island as Anchor Shareholder definitely allows us to position