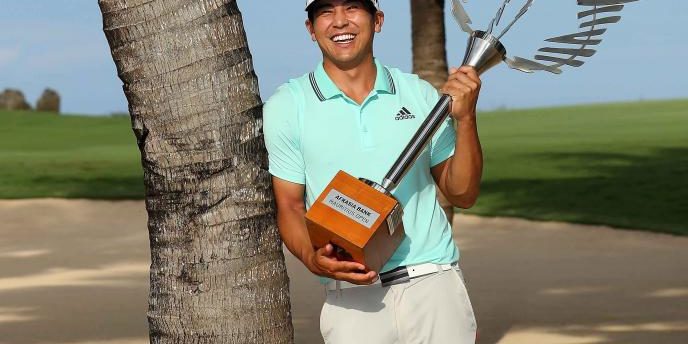 Thursday 29th November 2018: It’s 06:30, the sun is already well over the horizon, promising a sweltering day… The first 3 pros (of 156 starting) are about to tee off for the first round of the AfrAsia Bank Mauritius Open at Anahita. Held for the 2nd time at the Four Seasons Golf Club, Mauritius at Anahita on the east coast of Mauritius and the second tournament of the 2019 Race to Dubai calendar, this event has continued to grow; and this year, players from more than 30 nations are present. Day one ends with Victor Perez of France and S Chikkarangappa of India leading the field by one stroke. Closely chased by Jaco van Zyl, Kurt Kitayama, and Masahiro Kawamura. There has been a buzz in the air all week about the fact that ‘The Big Easy’ himself, designer of the course back in 2008, and 4-time major winner Ernie Els is participating for the first time. All three previous tournament winners, Georges Coetzee, Jeunghun Wang, and defending champion Dylan Frittelli are also present, a testimony to the attraction of both Mauritius and AfrAsia Bank Mauritius Open. In spite of the rain on Monday and Tuesday, the usual pre-tournament sponsor-related events have taken place, one highlight being the golf clinic for young players with the professionals present. ‘Golf for All’ is organised by the Mauritius Golf Federation with the focus of growing the game especially amongst juniors. The clinic was also conducted in association with the AfrAsia Foundation and aspiring players from both the foundation and the MGF attended. The clinic also has a clear aspirational objective of the tournament organisers and sponsors who see it as not only growing ‘Brand Mauritius’, but also exposing young Mauritians to a hitherto relatively unknown sport, while also showcasing talented young athletes from all over the world who are enjoying careers as golf professionals.

Day 2, and the young American Qualifying Graduate Kurt Kitayama has repeated his first round of 65 and is now leading by 2 in front of S Chikkarangappa. Two Frenchmen are tied in 3rd place, one stroke behind. Another much-anticipated part of the tournament was the Pro-Am event on Tuesday that is in many cases the absolute highlight of the year for Mauritian golfers. Heavy rains at times on course did little to dampen the sheer joy and enthusiasm of many whom were playing with one of the world’s top professionals. Tuesday evening finished off with the cocktail and opening ceremony where old and new friends amongst players, their families, sponsors, and a veritable ‘who’s who’ of the Mauritian golf industry gathered to celebrate what has rightly become the premier sporting event of the Indian Ocean. Earlier, the press conference was held with humour and banter all around. Various representatives of the main sponsors, partners and players, all took part.

The presence of Ernie Els obviously added much value to the moment as it represented a rare opportunity for many journalists to ask questions of one of the most famous, and friendliest, golfers on the circuit.

Day 3: Having begun the day 6 shots off the lead, South African Justin Harding raced into joint lead with Kurt Kityama, after producing a sparkling 64 in spite of tricky conditions. After having played 18 holes in practice on Wednesday, Ernie Els was talking very positively about the course. He felt that, “It’s in good shape, and I think the guys can score.” He also expressed some amazement at having to play on a course that he designed with specific features: “We designed the golf course 10 years ago and this was during one of my phases where I liked small greens and run-off areas. Hopefully that doesn’t come back to bite me this week.” In the end, Ernie finished in 47th position on -3.

Day 4: Harding and Kitayama exchange the lead on the final day, while Mathieu Pavon of France also surged briefly into contention. At the end, Kitayama held his nerve to hold off both Pavon and S Chikkarangappa 2 shots behind at the finish, while Harding dropped into 4th place. It is evident that quality of the field will only continue to improve at AfrAsia Bank Mauritius Open. More professionals on the 3 Tours that have sanctioned this tournament are discovering Mauritius either through word of mouth spreading across the tours, or by watching the live broadcast around the world. This year’s winner Kurt Kitayama began 2018 ranked at 1,118 in the Official World Golf Rankings. He finishes the year in the Top 200, at 198. While this is doubtless a reflection on a stellar year’s hard work and performance, the knock-on effects for Mauritius, and this tournament in particular, are certainly concrete and manifold. Kurt has subsequently gone on to record a second European Tour victory in the 2019 Oman Open which vaulted him to position 105 on the Official World Golf Rankings. We look forward to an even greater event, with the increasing presence of top golfers on the circuit making the AfrAsia Bank Mauritius Open an unmissable date on their calendar for the future. Look out for this year’s event which will be staged at the magnificent Heritage Golf Club from the 5th – 8th December.